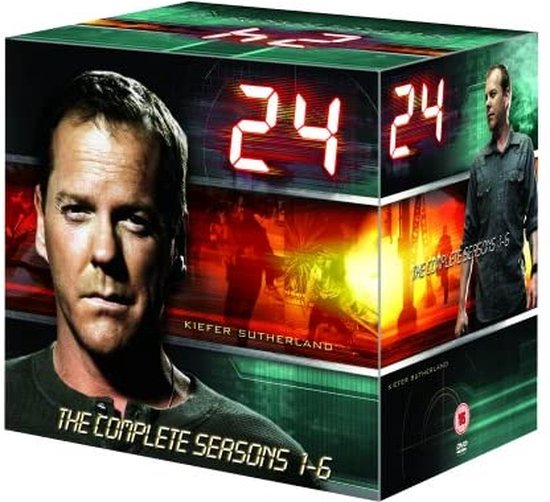 The first six seasons of the popular real-time drama series featuring Federal Agent Jack Bauer (Kiefer Sutherland). In 'Day One', Jack, an agent for the CIA's Counter Terrorist Unit (CTU), is trying to prevent the assassination of front-running Democrat candidate, Senator David Palmer (Dennis Haysbert), after the CTU receives a death threat against him. However, a traitor amongst Jack's colleagues manages to hamper his progress, and Jack finds that he has been framed for the assassination himself. He flees the CIA agents on his tail in a desperate attempt to find the real perpetrators, led by Ira Gaines (Michael Massee). Injured, and armed with nothing except his mobile phone and the help of trusted colleague Nina Myers (Sarah Clarke), Jack's situation becomes increasingly precarious. Meanwhile, his teenage daughter Kim (Elisha Cuthbert) has gone missing after sneaking out of the house with her friend Janet (Jacqui Maxwell), and Jack's ex-wife Terri (Leslie Hope) unwittingly puts herself in grave danger when she goes looking for her. 'Day Two' takes place a year after Jack prevented Palmer's assassination. Having had time off to cope with his wife's death, Jack is now called upon by the CTU to find a terrorist nuclear bomb in Los Angeles. Meanwhile, Kim, who has been working as an au pair, is forced to go on the run from her abusive employer after he attacks her and the little girl, Megan (Skye McCole Bartusiak), that she is looking after. But when she takes Megan to the hospital, Kim is arrested for abusing the child. 'Day Three' takes place three years on from the events of Day Two. Jack has successfully captured and imprisoned the head of a Mexican drug cartel. But when a van deposits a dead body outside the LA Health Unit infected with a deadly virus, the Counter Terrorist Unit uncover a plot to blackmail the US Government with the threat of a released bio-weapon that will kill millions to ensure the release of the drug baron. Jack must infiltrate the gang and rid the world of the virus threat. Meanwhile, President Palmer is in LA seeking re-election to a second term, with his new chief of staff and girlfriend in tow. 'Day 4' takes place 18 months after Day 3. CTU has a new leader, Erin Driscoll (Alberta Watson), a steely government agent who made firing Jack Bauer one of her first priorities on taking up command. After an explosion on a commuter train, Jack, who is now working for Secretary of Defence James Heller (William Devane), and who is also romantically involved with Heller's married daughter, Audrey Raines (Kim Raver), suddenly finds himself heading back to CTU for a meeting with Driscoll. Jack believes that the train explosion is a prelude to bigger things to come, and when it seems that Islamic terrorists are launching an all out assault on the USA, Jack leads CTU's response in a desperate race against time. 'Day Five' takes place 18 months after Day 4. Jack is living under a new alias, as Frank Flynn, and working on various oilrigs and refineries throughout America. He is currently living with Diane and Derek Huxley, a family near the Mojave Desert, South Eastern California. Meanwhile, an unknown figure orders the assassination of the four people who know Jack is alive--Tony Almeida, Michelle Dessler, Chloe O'Brian and Former President David Palmer--to frame him. He returns to LA to clear his name when a hostage situation erupts. But it is only a diversion by collaboration of conspirators and Russian separatists to obtain 20 canisters of Sentox VX nerve gas. The gas was originally to be used to attack Moscow, but the separatists begin to release it in LA in retaliation after they discover that a US agent has infiltrated their organization. Jack attempts to search for the remaining canisters and expose treachery deep within the White House. 'Day Six' takes place 18 months after Day 5. The U.S. President has negotiated Jack's release from a Chinese prison so that Jack can help stop terrorists attempting to set off 'suitcase nukes' in U.S. cities. Unfortunately time is not on his side, and an explosion rocks LA. As well as trying to catch the terrorists, Jack is having problems with his family, which appears to be becoming involved with right wing patriots. Elsewhere, Jack's Chinese abductors inform him that they have Audrey Raines (Raver) in custody and will only exchange her for classified Russian intelligence. When Russia gets wind of the situation, relations between the two superpowers head for meltdown.
English subtitles